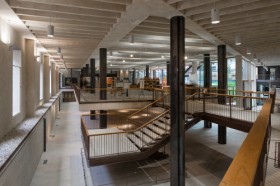 Hispania Nostra is organising a major photographic exhibition about the Spanish winners of the European Heritage Awards since its creation in 1978. Spain is first in the European ranking, having received a total of 148 awards. For the first time ever, this exhibition will display the country’s most outstanding heritage accomplishments honoured by Europa Nostra and, since 2002, also by the European Commission. It will be held at the College of Architects of Madrid and officially opened on the evening of 23 May, during the 2016 European Heritage Congress in Madrid.

The photo exhibition will take us on a fantastic journey across Spain over nearly 40 years, showing the best and most inspiring examples in conservation, research, dedicated service to heritage, and education, training and awareness-raising. A total of 92 remarkable heritage projects were presented with Europa Nostra Awards between 1978 and 2001, while 56 won the European Union Prize for Cultural Heritage / Europa Nostra Awards between 2002 and 2015. Of these, seven projects received a Grand Prix and a monetary award of €10,000 each between 2008 and 2015, namely: in the Dedicated Service category, Dr. Glenn Murray (2009); in the Conservation category, the Roman Theatre of Cartagena (2010), the Preindustrial Buildings in Ademuz/Sesga in Valencia (2011), the Number 2 Blast Furnace in Valencia (2012), the Roman Theatre of Medellin (2013), the Cooperative Wineries Programme in Barcelona (2014) and the Salt Valley of Añana in the Basque Country (2015).

All 148 award-winning projects from Spain demonstrate that cultural heritage is a strategic resource for sustainable development at regional, national and European levels. This is precisely the core message of the Report ‘Cultural Heritage Counts for Europe’ (CHCFE) – recently developed by Europa Nostra together with 5 other European partners – which employs various award-wining Spanish projects as powerful illustrations that heritage generates countless economic, social, cultural and environmental benefits. The Spanish Edition of the CHCFE Executive Summary will be presented during a debate on this topic to be held at the Espacio Bertelsmann on the afternoon of 23 May, prior to the exhibition’s opening.

The photo exhibition will also feature the 16 winners of the Hispania Nostra Awards, set up in 2012 with the aim of contributing to the dissemination of good practices in the heritage field in Spain.

Organised by Hispania Nostra to mark its 40th anniversary, the exhibition is supported by the Spanish Cultural Action of the Ministry of Foreign Affairs and the Spanish Agency for International Development and Cooperation (AECID) and is designed to be shown at various cultural centres both in Spain and abroad.

The EU Prize for Cultural Heritage / Europa Nostra Award received the support of the EU Culture programme and is now supported by the EU Creative Europe programme.